One of the most annoying things for me, as an organic chemist, is getting "publishable" NMR – you know, those pristine clean spectra, free of trace impurities and solvents. The problem is exacerbated when you work on a small scale, less than 10 mg. Even the tiniest amount of "stuff", naturally present in lab environment, can ruin a day of work:

The top spectrum was obtained after purification on a traditional column equipped with a glass frit. It is of rather good quality, with the exception of an indentified signal at 0.7 ppm. The sample was then repurified through a pipette column with a cotton wool plug – and gave the bottom spectrum. Urgh! It looks worse than before!

I used the same solvents, the same NMR tube, and even opted for brand new fraction vials. What happened? The cotton wool. See what I got when I washed it with a few solvents: 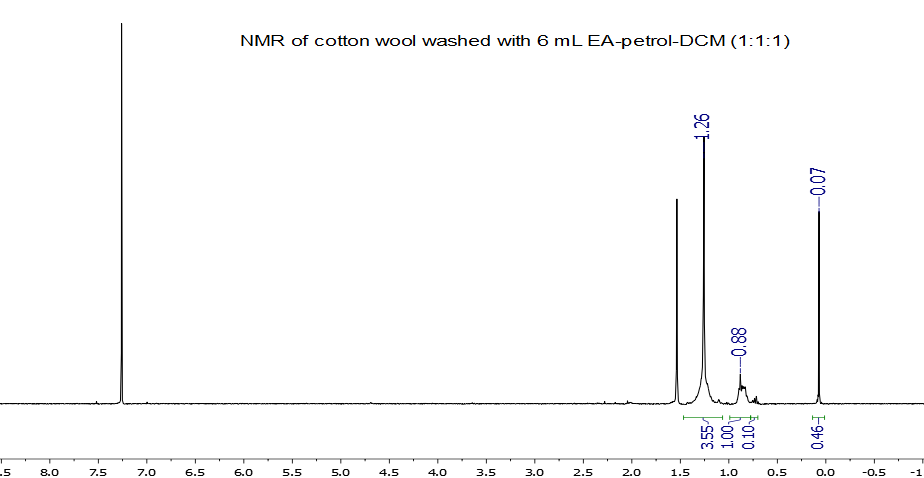 It appears that our lab was stocked with domestic cotton wool. It is good for household use but not for microscale chemistry. When I switched to glass wool, the problem was gone. Nice, clean spectra.

As I said, the peaks are most prominent when one works on small scale. The amount of cotton wool, and of grease by extension, is relatively independent of the column size. Having 1-2 mg of crap in 100-200 mg of otherwise pure compound is "the number I can live with". The same 1 mg of impurity in 5 mg of the product will appear prominently in NMR.